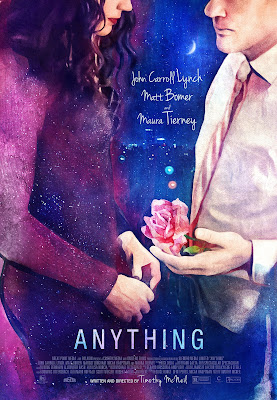 ANYTHING is exactly the sort of film Unseen Films was started to highlight. A wonderful little film that is not going to get its full time in the spotlight unless someone shines a light one it. If you want to see small gem of a film then put anything on your must see list for this upcoming weekend.

When Earl‘s(John Carroll Lynch) wife dies he is left deep in mourning. Deciding to pack up and move to Los Angeles to be closer to family he takes an apartment in one of the less affluent parts of town. Delighted with the cast of characters living around him Earl begins to reawaken. He also becomes entranced with Frida(Matt Bomer), a trans woman who finds Earl just as intriguing.

Sweet little film is about finding and accepting love where it happens. It is an absolute delight.

That the film works as well as it does is due entirely to the characters and the actor who inhabit them. Both John Carroll Lynch and Matt Bomer are note perfect. You completely see how they could end up colliding. The rest of the cast is equally good keeping things real and not letting things to get out of hand. While I’m certain things play out a little too neatly, I also have no trouble believing that it all could happen this way.

I smiled a lot- and I got misty.

ANYTHING opens in theaters Friday
Posted by Steve Kopian at May 09, 2018