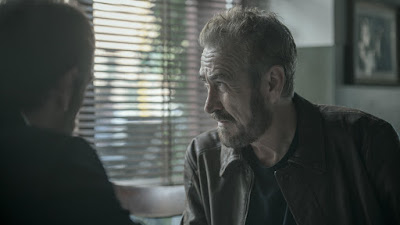 Valerio Mastandrea gives a great performance as a nameless man who seems to have all of the answers. Day and night people come to him asking for their wildest desires and he tells them how to achieve it, but telling them there is a price. he also demands that the return to him regularly to update him with details.

Based on the series The Booth at The End, THE PLACE is a heady and expected charmer. While it clearly asks us to ponder what we would do to get what we truly wanted, the film also gives us a glimpse into the hearts and souls of the people visiting this name less man.

Despite being a kind of cinematic stage play, we never leave the man or the table though time clearly passes, this is a gripping film.  We are sucked into the lives of everyone who passes, and even the an himself. Who is this person? We don't know What is his game? We can only guess. In theory this shouldn't be as compelling as it is but the entire cast sells the whole affair. We believe everything e are seeing which says a great deal.

Highest praise has to go to Valerio Mastandrea who asks questions, says stray comments and writes in his book. He seemingly does very little but reveals everything to us in each look and gesture. By the time the end comes around we feel the weight of the world upon him.

While I highly recommend the film I will pass on one word of warning, if you want action and changes of scenery look else where. This film is all talk in one place. For those who can accept that this is going to be a glorious way to start this years Open Roads look at new Italian cinema.

THE PLACE plays Thursday May 31st at Lincoln Center. For tickets and more information go here.
Posted by Steve Kopian at May 28, 2018