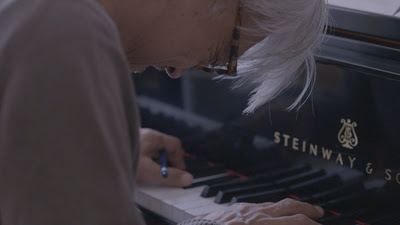 I’m a fan of Ryuichi Sakamoto. I fell in love with his music with the score to MERRY CHRISTMAS MR LAWRENCE. It is music that I carry with me at all times, not in my phone or on a CD but in my head. The music runs through every fiber of my body and springs out when I need a lift. I love every other bit of music of his I’ve ever heard (LAST EMPEROR,REVENANT and his solo material), but the MERRY CHRISTMAS  score is something more.

I have to be honest and that I went into Ryuichi Sakamoto: Coda wondering if we would hear some of the score, and which part. I was completely taken aback when the first piece of music was the main theme from MERRY CHRISTMAS played live and completely- at which point I was completely willing to go anywhere the film was going to take me.

And where here it took me was to some truly wonderful places.

Filmed over several years the film is look back by Mr Sakamoto in the wake of a diagnosis of cancer. After taking time off to go through his treatment he begins to put together new music, inspired in part by the way Andre Tarkovsky used sound and music in his films. This allows him free rein to talk about his entire career and show us how he puts his pieces together. It is a wonderful journey that gives us a look inside the mind of the man.

What I delighted in was getting to see Sakamoto being delighted by what he was doing. Time and again this very serious looking man would go wide eyed and grin when something turned out to his liking. I also loved that we got to see him do somethings that seem silly- such as walking out into the rain with a plastic bucket over his head in order to get the right sound. Wonderfully nothing will stop him for creating the sound he hears in his head.

And then there is the soundscape of the film- endless music by the master playing like a grand mix tape. If you need an introduction to the sonic magic Sakamoto this film is it.

I was and I am in complete awe. Rarely has any film ever brought us this far into the creative process. I’ve seen some truly songwriter documentaries where we’ve seen the artist compose and record, but rarely have I ever had the sense that life was a pure act of creation. No matter what Sakamoto is doing he always seems to be on the lookout for a new sound or beat or motif to use. Watching him wander the world recorder in had makes it clear that music is absolutely everywhere and that he wants to share it with anyone who will listen.

I was deeply moved. Seeing this film was one of the most magical experiences I’ve had at this year’s Tribeca Film Festival. While I was damn near close to one with the film I know that I wasn’t the only one. The other writers sitting around me were absolutely delighted.

I would hate to think that Coda is indeed a coda for the great man. Personally I would like this to be more a pause before moving on to other wonderful creations.

For more information or tickets to the remaining screenings go here
Posted by Steve Kopian at April 26, 2018