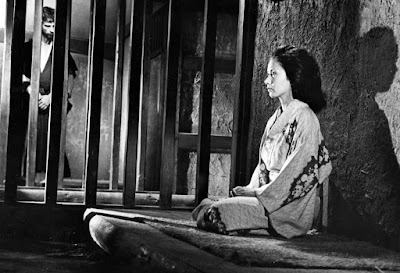 With SILENCE playing at the Museum of Modern Art as part of Kazuo Miyagawa: Japan’s Greatest Cinematographer I am reposting the review I ran when Martin Scorsese's film was released to theaters.

With Martin Scorsese's adaptation of Shusaku Endo's novel SILENCE now in theaters I chased down a copy of the first film version of the film made by Masahiro Shinoda. Shinoda wrote the screenplay with Endo, so you would think that what resulted was author approved, but Endo didn't and he disavowed the finished film. Having seen read the book, I can understand why, but at the same time, on it's own terms it is a very good film.

For those unaware of the plot, the plot of SILENCE concerns two Jesuit priests in order to find out what exactly happened to an earlier missionary. It is a difficult time in Japan and Catholicism is band and it's practitioners are hunted down. The priests have to hide from the authorities who would love nothing more than have them publicly renounce their faith. Eventually they are captured and the resulting battle of wits/faith/philosophy is the film.

It should be stated that this film has several radical changes from the novel. I will be discussing some of them. I will not be discussing the Scorsese film because as of this writing I haven't seen it.

Seeing SILENCE and taking it on it's own terms, I found it to be a very good film about faith and people trying to remain true to what they believe in, or think they believe in. The drama and the story structure are largely lifted from Endo's novel so things move along as the author intended and it's all given the weight he invested in the situations which helps carry things along.

If you've read the original novel the film is going to play differently than it would just walking in off the street. Shinoda and Endo have changed things around which changes some of what the story is now about. The first thing you'll notice is two changes, first the film begins with the priests arriving in Japan. the second, and this completely alters the story, we don't know why they are in Japan other than to find Father Ferreira. In the original tale they have come to Japan to see if their teacher truly had renounced his faith. Here they are simply looking for a lost friend/priest. Not giving the men the additional reason for what they are doing changes what the story as its no longer a long mediation of the depth of faith but something else. I think the fact that we aren't given the reason until some point into the film is one of the reasons the ending of the film wobbles.

Actually not having the reason alters how we see the Kichijiro character. In the novel the fact that he is himself a Catholic who renounced his faith and yet still believes sets up an interesting dynamic with the priests who are trying to find out if their teacher did something similar. By not giving us that motivation we are kind of left hanging- who is he really. While his actions move the plot we don't have the resonances we need to understand what Endo was trying to tell us trying to tell us in his novel.

On the other hand this is a film and the man in charge is Shinoda so we are forced to have to try and divine what he is trying to tell us. I think its something similar to Endo but not the same thing. This is most clear in the final part of the film where a certain element of spirituality is removed from the tale. Shinoda's silence is much more deafening than Endo's.

This is a very mannered production with everything seeming set up for the director's purpose. You can feel the hand of Shinoda moving things around. You can see him lining up all of his ducks. Granted it's how it had to go but at times it's a tad too obvious. Even allowing that I finished the novel a short time before seeing the film didn't account for some of the sense of foregone conclusions I felt at times.

Worse both priests, especially Father Rodrigo, come off as incredibly arrogant and immovable through most of the film and so when it comes time for the big climax don't feel it emotionally. I never got a sense of him wavering or questioning his faith in his heart. Intellectually I knew he was but emotionally he remained distant. Its a problem that haunts the film through much of the second half. I don't know if it's the performance or the direction but what should have been a crushing moment isn't. I suspect that the problem is the difference between what you can do with words in a book and get inside a character through narration where in film sometimes the inner struggle is lost. Even the films final shot which gives us an emotional reaction from the priest doesn't connect emotionally.

I should also mention that the film's biggest flaw is a bit of serious miscasting of Tetsuro Tanba as Father Ferreira, the object of the search. While there is nothing wrong with him as such the fact that he doesn't look like a man from Europe and he speaks English with a thick Japanese accent (English is substituted for Portuguese) works against the film.

This isn't to say it's a bad film. Its absolutely not- I absolutely think that the IMDB rating of 7 is right on. I really like the film, especially as a meditation on faith and belief in a new world. I think it's a great look about the clash of ideas as societies come into contact and conflict. While I think it doesn't nail it in the conclusion because there is a little too much head over the heart, everything in the proceeding two hours is deeply thought provoking - in some ways that enhance the novel and in others that are completely new.

Having seen the film and having spent many hours pondering it and the novel I completely understand why Endo disavowed the film. The alteration of motivation changes what the story is. Where Endo's tale is a spiritual journey about our own faith, Shinoda's film is a story of belief in an alien world and a clash of cultures. Its a version of the story of the novel but it is not completely the heart of it. I can completely understand why Endo would eventually walk away from something he had worked on. However I don't think the changes invalidate the film either as a version of Endo's story, it is after all extremely enigmatic, or as a film on it's own terms.

What is really cool is that despite differences from the novel the film stands on it's own. I really do think that had I seen the film blind, without reading the novel or being aware of the Scorsese film I would have liked this film just as much (though I don't think more). Yes it is flawed on it's own terms, but it also a wonderful meditation of thoughts and ideas. Its a film that is absolutely worth seeing for itself and not for any connection to any other version of the story because it will confront you with a whole new set of questions about what you believe.
Posted by Steve Kopian at April 23, 2018