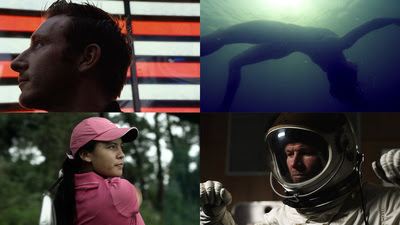 SONIC BREAKS
A look at Felix Baumgartner's efforts to jump from the Earth’s stratosphere and land safely. It focuses on the preparation to do it.

An excellent look at what it really takes to make a jump such. While it may seem a tad slow the film does what it sets out to do and puts you into Baumgartner's head space and really forces you to consider what doing something like this takes- which is more than just riding high up and jumping.

LOCKED IN
Moving portrait of Victoria Arlen who for four years had locked in syndrome but managed to recover and fight her way back to being able to win gold at the London Para-Olympics.

A charming film that is frustratingly only 36 minutes which means its either too long or too short to get a regular release or play in an hour long slot on ESPN. Definitely one to see.

A MOUNTAIN TO CLIMB
A Nepali teen, Pratima Sherpa wants to become that countries first professional golfer. Good if overly dour and serious look at a young lady with what is a very off beat dream for someone in Nepal.

RUN THE ROBERT YOUNG STORY
The story of Robert Young who tried to set a record running across America...however there were allegations of fraud.

Least serious of the four films is also the best. A thoughtful and thought provoking look at the human condition that has implications beyond being just a sports story or a feel good one. This is the one of the four that I would happily watch a second or third time.

For tickets and more information go here.
Posted by Steve Kopian at April 24, 2018