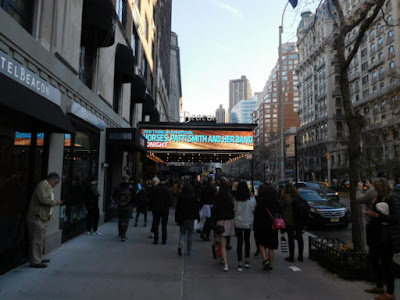 A very long day at the festival where I did five films.

MCQUEEN is a portrait of fashion designer Alexander McQueen. A full review is coming but I unexpectedly fell in love with the films images and Michael Nyman score

MAPPLETHORPE is a portrait of artist Robert Mapplethorpe has a stunning portrait by Matt Smith at Mapplethorpe but not much else. Its not bad but unremarkable to the point I'm not going to do a long review.

BRAID - Form over content  film about girls trying to get money to cover some stolen drugs and having to play some sick games. The less said about this film the better.

HOWARD is a lovely portrait of writer Howard Ashman whose work on Little Shop of Horrors and for Disney changed musical entertainment as we know it. I loved it and got misty all through it. (a full review will follow

HORSES: PATTI SMITH AND HER BAND- a live performance of Smith's classic album is a great record of an artist at the top of her game. As a concert film it's okay. As a sonic experience its an absolute delight.

A report on Smith's set with pictures and video will follow shortly
Posted by Steve Kopian at April 24, 2018