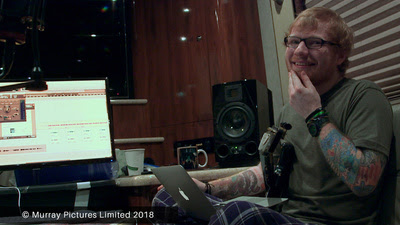 This record of Ed Sheeran during the act of creation is going to be best for  and on interest to his fans.

Filmed by his cousin who has been filming him for years, the film follows the singer as he holds up with friends and puts together the songs for one of albums.

Simply a collection of moments the film is very fly on the wall, however it is little more than a home movie with a better sound mix. We watch as life happens with no context about when or where things are happening. We don't really get to know anyone other than Ed likes them. We also bounce from person to person and song to song with such frequency that it all becomes a blur. All the songs become a jumble and bleed into each other leaving us with the feeling that maybe all his songs sound the same.
Posted by Steve Kopian at April 30, 2018