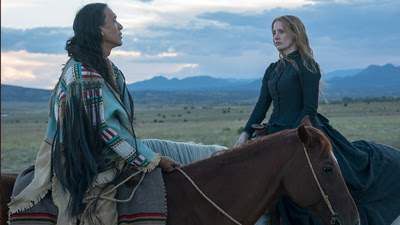 Based on the story of Catherine Weldon who left New York City and went West to paint Sitting Bull. Once there she runs head long into the army who wants to screw over the Native Americans and the locals who want to wipe them out.

Well made western biography is an okay time passer. Not breaking any new ground the film is hampered by the fact that it hits every cliche you can imagine concerning a tale like this. Never mind that some of them are true, this film plays them all with no real effort to conceal the old hat nature of its bag of tricks. I didn't know Weldon's story but I could have walked out in the middle for half an hour and come back in and not missed anything.

It doesn't help that the film 's look at the state of how this country treated its indigenous population is considerably less complex and less moving than many recent westerns such as the excellent HOSTILES or even SWEET COUNTRY from Australia which dealt with many similar themes. While it isn't fair to compare unrelated films, the difference between this film and others is too glaring not to notice especially if you have been keeping up with them.

While I could pick the film apart for spotty plotting or the lack of any real characters, it would be grossly unfair since if you take the film completely on its own terms it isn't bad.

Worth a look if the subject appeals to you- though if you don't have Direct TV the Tribeca screenings maybe your only shot at seeing it.

For tickets and more information go here.
Posted by Steve Kopian at April 24, 2018