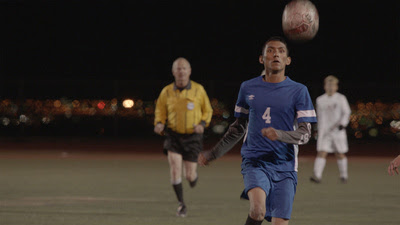 Matt Ogens' HOME + AWAY follows three students in their last years at El Paso's Bowie High School which is 150 yards from the US border with Mexico. Over the course of the film we follow  soccer player Erik Espinoza Villa, baseball player Francisco Matta, and wrestler Shyanne Murigia - as they try to finish up their courses, compete for District championships and deal with lives that are split across the border.

Quiet and unassuming HOME + AWAY seems to be the sort of film you've seen any number of times. The lower income kid struggles to make good and achieve their dreams. It is the sort of film that the Tribeca Film Festival is full of every year.  However what sets HOME + AWAY from most others is that the film just shows us life . We are there on the playing fields, in the living rooms and in the classrooms as the kids try to do their best and figure our what direction we want to go.  Nothing is over sold we just watch it happen, even if everyone is very aware the camera is there.

I know that sound like it isn't anything special. And for most of the film I was thinking that this was just another poor kid over comes adversity film that would come and go quickly. Then something happened- As the film moved into its final moments I found myself tearing up and crying. Ogen's low key approach had worked it's magic and I found that I really cared about hat happened. I really wanted to know where they are now. It truly mattered to me.

For tickets and more info on the remaining screenings of HOME + AWAY go here
Posted by Steve Kopian at April 22, 2018