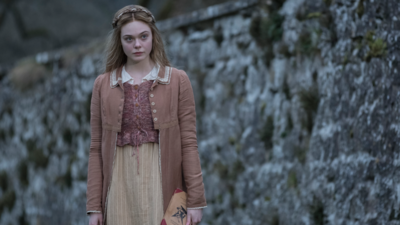 Elle Fanning stars as the creator of Frankenstein. Covering the period from just before Mary's meeting with her future husband to just after publication of her world altering novel.

Well acted and great looking MARY SHELLEY is a film that manages to generate some emotion despite never really earning it.  A kind of speed trip through Mary's life the film hits all the high points with out all of the sensationalism of say Ken Russell's GOTHIC. Indeed the trip that inspired the tale is just one in a series of events that brought the monster to life.

And that is kind of the problem with the film, it hammers away at all of the things that came together to make the novel come together. Every time something happens we get a shot of an expanding universe and a musical underline to let us know that this was one of the moments. It becomes silly after a while with the effect it takes us out of the film instead of keeping us in it.

The music by Amelia Warner is a stunner (I'm going to see about getting a copy) but director Haifaa Al-Mansour has mixed it badly so that it is often intrusive than actually part of the story.

Still despite it's problems the film does generate some emotion at the end. When Shelley returns for a salon where the book is discussed and categorically states that the book was beyond his ability to write and was the work of Mary brought tears to my eyes.

The fact that the film generates emotion despite it all makes it worth a look see, though I'm not certain you need to go see it at Tribeca for festival prices since the film will hit theaters on May 25th.

For tickets and information on the Tribeca screening go here.
Posted by Steve Kopian at April 28, 2018