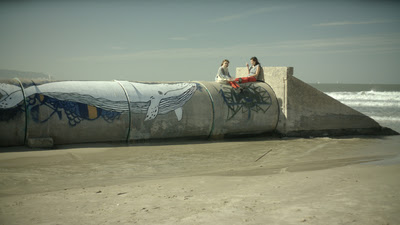 Magical realism permeates this tale of a 16 year old girl in a dying Israeli sea side city who makes up a story of a mermaid for a visiting reporter that puts the city on the map.

Odd ball film never is sure what it wants to be, a comedy  or drama? Real or fantasy? While most certainly an entertaining film it's closing moments leave an odd taste in one's mouth. What exactly happened at the end anyway? Its for us to decide but at the same time we really can't be sure.

Certain to be a problem film in today's sexual abuse aware world, Lana, the main character is only 16 and carries on a physical relationship with guy possibly twice her age. Watching it I was more than a little uncomfortable since this is the sort of thing that the media has been up in arms over. While the age difference is never mentioned it is a kind of elephant in the room.

Talking with people who speak both Hebrew and Russian I have been informed that there are problems with the subtitles. What we are reading is not always what is being said, particularly with the Russian dialog. The film also doesn't translate any of the songs which I have been told are vital to understanding what is really going on.

Personally I liked the film until the final ten or fifteen minutes where the film kind of breaks with reality and goes into a dream like world. While it did leave me feeling slightly disappointed I still liked the film.

For more information and tickets to the remaining screenings go here
Posted by Steve Kopian at April 24, 2018