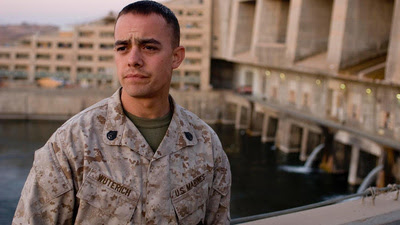 While I have seen films I really liked Michael Epstein‘s HOUSE TWO was the first great film I saw at Tribeca 2018. A shattering, heartbreaking and infuriating look at the massacre of civilians in Haditha Iraq by US Marines, it made me physically ill because of the massive waves of injustice involved in the whole affair. In no uncertain terms this film will piss you off for a whole slew of reasons.

The story in the briefest of terms is that in the aftermath of a roadside bombing 24 civilians were killed, a number of them women and children who were hiding in a bedroom in “House Two”. When the story broke because Time magazine got the story after CNN passed NCIS investigated. However there was a political agenda at work and it suddenly became clear to the defense and NCIS that all was not kosher.

Rarely has a film made me physically ill because things are just wrong. My stomach knotted and I wanted to get up and leave the theater. From the methodical and deliberate murder of women and children, to the manipulation of evidence, to the intentional freeing of guilty parties the whole Haditha affair stinks to high heaven and I was made sick by it. My regular day job is in criminal justice and if any of the stuff that happened here happened where I work the people involved would have been shitcanned.

While not a perfect film, it springs a couple of things out of left field (the video of the massacre aftermath for example- who is the soldier who shot it?), the film is still incredibly powerful. It’s an unending series of body blows that will leave you shaking your head and talking to yourself. I wanted to scream.

What is most sickening about the film is that the quest for justice became a quest to protect the name of the Marine Corps. The Marines never had a massacre of civilians- or so they want people to think. By throwing justice out the window they keep their record intact . However as one of the defense lawyers says near the end, the fact that they are offering a puissant plea deal after all that happens makes them all look even worse than if they had admitted what happened and sent the offenders to jail.

One of the very best films at Tribeca 2018 and of the year as well.

For tickets and more information go here.
Posted by Steve Kopian at April 22, 2018