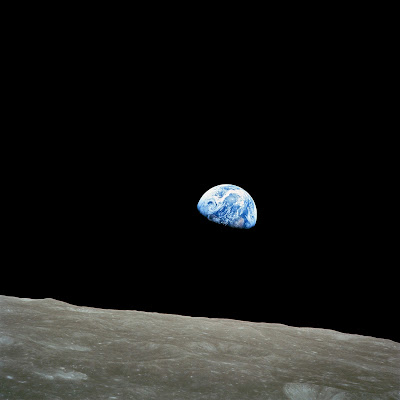 Quite possibly the best film I've seen in 2018 is EARTHRISE a film about the Apollo 8 mission around the moon that produced the iconic image of the distant earth rising over the surface of the moon.

A reminiscence of the three astronauts Bill Anders, Frank Borman, and Jim Lovell about what it was like to travel to the moon, EARTHRISE is the first film I've ever come across that truly made clear what it was like to not only be in space but to go away from earth and look back at the planet from an impossibly far distance. I was moved to tears by the men's simple words about what they saw and experienced.

I am in awe of the achievement of this film. Simply the three men talking while we see film they shot while on their mission, There is, on the face of it nothing special, the film we've seen before and the stories we've heard but something about this film makes it all click. Seeing the world so far away on a big screen while the men told of what they saw I was reduced to raw emotion. For the first time I understood how and why they were changed by their flight.

Whats most amazing is the photographs were secondary. The first priority was getting their and back and while they were there the moon was what they had to shoot not the earth---however when they all saw the earth rise they all knew that was why they had come.

I have no words other than see this film- preferably as bi ah humanly possible when it plays in the HOME SWEET HOME collection of shorts at this year's Tribeca on April 24,25 and 28.

For tickets and more information go here.
Posted by Steve Kopian at April 21, 2018