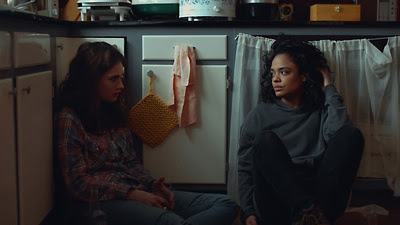 My decision to see LITTLE WOODS was made entirely spur of the moment when I sudden realized I didn't want to see a very heavy drama and so I chose this thriller instead. The result was I was entirely delighted with my choice.

The film concerns two sisters both in binds. One is pregnant and not sure what to do, while her sister is about to finish her probation but needs quick cash to pay off her mortgage so the bank doesn't take their childhood home. Realizing the only way to get money fast is to go back to dealing drugs but it opens up a world of trouble.

Once you get past the opening couple of minutes which are filled with cliche images and music, the film clicks and races straight on to the end. While some of the plotting does take us down familiar roads, the acting and characters rise to the occasion and make the film something special.

LITTLE WOODS is a nifty little thriller and worth a look.
Posted by Steve Kopian at April 30, 2018