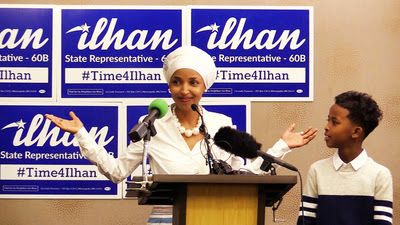 Showing what it took to get elected this film brought a couple of tears to my eyes. This is a feel good film about how you can fight the system and how you can bring change if you really want it.

Following Ilhan from when she decides to run through the primary, where she effectively won the seat (the Republicans didn't put anyone up against her), through the troubles that arose via fake news and on to her taking her seat, this is good time with a great lady. That the film is as compelling as it is is due to entirely to Ilhan,who has a natural charm and charisma that makes her a natural. You an see why the political organizers wanted he to run.

What got me misty was the small human moments such as the absolute love and pride in the faces of her husband and dad when she won or the small but thundering moment when Ilhan's husband pulls her aside to simply say I love you.

Hands down one of the best films at Tribeca TIME FOR ILHAN is a must see.

For Tickets and more information go here
Posted by Steve Kopian at April 21, 2018