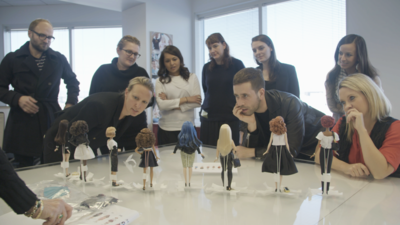 A look at the life and times of Barbie wrapped around the redesigning of Barbie into different body times and ethnicities.

This much better than I had hoped documentary looks at the people doing a redesign on the world's most recognizable product.  Apparently 90 something percent of the people in the world recognize Barbie so the need to redesign her comes with all sorts of problems (if you change her size you now have to change all the accessories as well). The film also charts the sociological battles that have been dropped on the shoulders of the toy.

At it's best the film is an excellent primer on the doll and its place in history. However it is, by necessity a bit vanilla. Clearly Mattel, Barbie's manufacturer, would never have allowed the film to go forward with all the access if it really had dealt with the darker aspects of the arguments against the the toy. To be certain all of the issues are raised, but they are just as quickly brushed aside. Barbie is ultimately a good thing in the eyes of the filmmakers.

While I like  the film I didn't love it. Part of it is the fact that the film is vanilla but also because I really don't care about Barbie. You are either an enthusiast or not. I am clearly not. If you are a fan or a collector the film is a must- all others proceed with caution when the film hits Hulu Friday

For information and tickets for the second and last festival screening go here
Posted by Steve Kopian at April 26, 2018