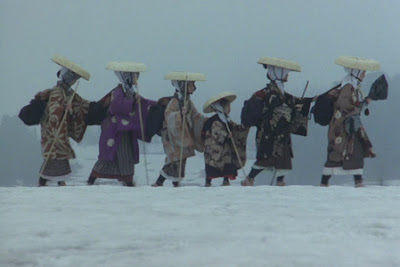 This is a modified review from JB from when the film played the Film Forum a few years ago but is now being presented because of the Miyagawa series.

Opportunities were limited for blind women in early Twentieth Century Japan. Able-bodied men on the other hand, were in high demand for military service in Siberia. Despite their hardships, a beautiful gozé (a blind troubadour) and an army deserter forge a deep but unconventional bond of love, perfectly reflected by Toru Takemitsu’s strange love songs in Masahiro Shinoda’s The Ballad of Orin, which screens this weekend as part of Kazuo Miyagawa: Japan’s Greatest Cinematographer at the Japan Society.

Abandoned as a young girl by her mother, Orin was taken in by a gozé house for musical training. In no way should gozé be confused with geisha. The women lived a monastic existence as brides of the Buddha. Of course, they were often called to entertain at worldly parties, bringing them into contact with men and temptation. Those who succumb are banished to a life on road as wandering minstrels, which indeed happens to Orin.

Senzo Tsurukawa is not like most men Orin meets in her travels. Rather than moving in for the conquest, he offers himself as her platonic protector. He even insists they call each other brother and sister, much to her frustration. Yet, even though they want different things from each other, the love they share is genuine. They even seem to have a semi-respectable future together running a clog stall, until Tsurukawa’s past starts to catch up with him. By the time they reach the appropriately ominous sounding village of Obama in the Wakasa province, tragedy seems inevitable.

Ballad is a perfect choice for the Miyagawa restrspective, given the role music plays in the story. Yet, despite the prominence of Orin’s songs, the music never overwhelms the on-screen drama. Though traditional in form, Takemitsu gives his score a postmodern-minimalist twist that sets a delicate but unsettling tone throughout the film.

Though worlds away from his New Wave noir films like Pale Flower, Ballad is one of Shinoda’s masterworks. There are unshakable images throughout the film, even during the opening titles. Also aptly known as Melody in Gray, Shinoda and cinematographer Kazuo Miyagawa use a color palette dominated by grays and greens, making coastal Japan look like Seattle. It perfectly suits Takemitsu’s melancholy score and Shinoda’s naturalistic approach.

Shima Iwashita is fantastic as Orin, powerfully projecting vulnerability and passion, without the benefit of her eyes. Yoshio Harada plays Tsurukawa like a young Toshirō Mifune, full of gruff bluster, but with a soft heart concealed inside. Their chaste love is arguably one of the most touching movie romances of all time.

The Kazuo Miyagawa: Japan’s Greatest Cinematographer screening will be one of the rare chances to see BALLAD on the big screen. A truly haunting film, Shinoda’s BALLAD is highly recommended.

BALLAD OF ORIN is screening as part of Kazuo Miyagawa: Japan’s Greatest Cinematographer which is being co-presented by The Japan Society and The Museum of Modern Art. Click on the links in names of each location for show times, tickets and more information
Posted by Steve Kopian at April 25, 2018