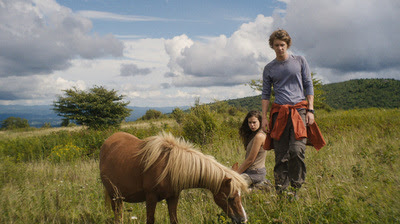 Young woman hiking the Appalachian Trail begins to travel with a young man after the man's father leaves the trail. A movie kind of happens.

Great looking vistas are the best reason to see this film where not much happens, and even if it does we can't really tell since we aren't told much. Basically we are left to suss things out via the expression on Laia Costa's face. Actually that is incorrect, we get a lot of shots of Costa from the waist up, but not much else.

Slow rambling, with some good scenes that never really tie together MAINE just sort of is there. The problem is we only get bits of scenes. Largely Bluebird (Costa) and Lake (Thomas Mann) look longingly at each other  and travel. we are supposed to pick up details from small clues, a wedding band that can be seen in one scene or a passing reference. How much of it is actually true on the part of Bluebird is up for grabs since the film ends with a few lines from her that we know are out and out lies, thus making everything that went before questionable.

The film is so low key in what it is telling us that at the critics screening I attended there were arguments about what did or didn't happen or what we are suppose to get from it all. It wasnt the sort of discussion that say followed INCEPTION where we have to figure out what is and isn't real, this was more basic things which weren't clear and should have been.

A great looking misfire, the film is not recommended unless you need sleep (several critics slept through the film)
Posted by Steve Kopian at April 25, 2018