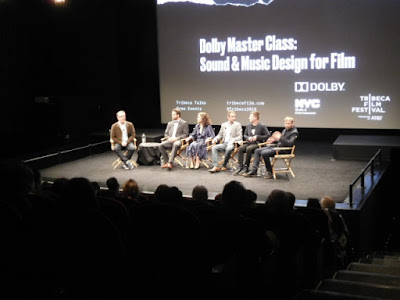 On Friday I stumbled upon a line for a Tribeca Master Class and realizing I had nothing better to do I joined the line and as a result was treated to an excellent discussion of sound in film, particularly documentary film.

The talk had Glenn Kiser from Dolby Labs talking to  Director Aaron Lieber, Editor/Screenwriter Carol Martori, and Sound Mixer Jurgen Scharpf,from BETHANY HAMILTON UNSTOPPABLE  and from NO GREATER LAW, including Director Tom Dumican, and Composer Stuart Miller.  What they did was to show clips from each film and then discuss them before turning things over to the audience for a few brief questions.

What I loved about the talk was that while a lot of the talk seemed to be focused on the Bethany Hamilton film because of its aggressive soundtrack Tom Dumican and Stuart Miller were fully involved. While they may not have had booming audio in their film they had a huge amount of information which they shared.

While I can't recount the entire talk I would like to mention some things that were discussed:

One can not do water sound with mics. Almost all of the sound of ocean in BETHANY HAMILTON  was created in the studio because you simply can't get the sound on tape. Mics are not capable of getting the full range of sounds so most of what was heard in the film recreation

There was a discussion of how low end sound adds gravitas to a soundtrack.

The filmmakers also discussed the use of pre-existing music and how the song used in the training montage in BETHANY HAMILTON shown was given to them not as a completed track but with all of the audio bits as separate tracks so they could remix it as needed. They stressed that this was very important when using preexisting music since it allows filmmakers to fine tune the song to their film.

The discussion of NO GREATER LAW began with how the director and composer started talking about the music before anything had really been shot. Stuart Miller said that because of time and money constraints that he wrote the film stills before the film was finished.

There was a lot of talk about less sound is sometime more. How a less intrusive score can how a bigger impact and how removing sounds makes things sound even more real.

There was also a discussion of how often the best way to reduce noise is to add sound.

There was much more of course but I was too busy listening to take notes. 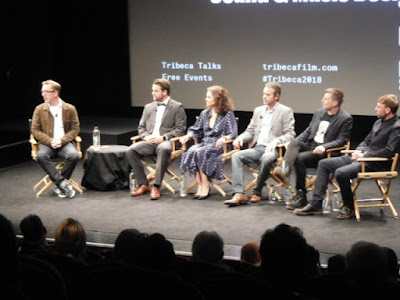