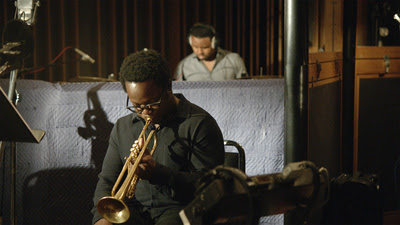 I'm not going to do a full on review of this film, JB is an expert on Jazz and is better suited to discuss the film's finer points in the context of being a document of the legendary label. His review is to be considered the lead one here at Unseen. However at his suggestion I'm going to say a few quick words from the stand point of some one just walking in off the street.

The film is a look at the history of Blue Note records which was founded by two German emigres who loved the music and didn't care if they really turned a profit.  Their roster is a who's who of jazz  greats.

As a primer this is a super little primer on the label, and on jazz itself. While most definitely missing a large portion of their history, the film still manages to give us a nice overview of the label that effectively changed music and culture as we know it. So many of the little records that didn't sell well are now considered classic, and their riffs are being used by current artists in large numbers.

I was greatly entertained.

For more information and tickets on the remaining screenings go here.
Posted by Steve Kopian at April 25, 2018