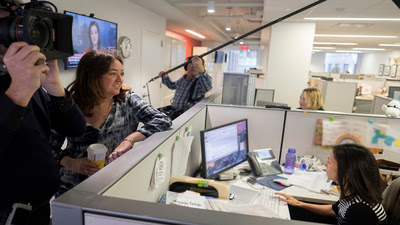 The final day of Tribeca 2018 was bittersweet. I only saw a single film, but it was a good one. I also had to say good bye to the festival is always a sad thing to do.

THE FOURTH ESTATE is an episode of the upcoming Showtime series about the first year of the Trump Administration through the eyes of the New York Times. Its an inside look at how the media deal with the insanity that Trump let loose on Washington and America.  Interesting for numerous reasons, not the least of which is watching the seasoned reporters trying to make sense of what amounts to a martian in their midst. It's very clear they were not prepared for the new President.

Also intriguing is watching events transpire through the lens of hindsight. We know where all the threads are going to lead. There are some genuine laughs and groans because know how things will play out. We know how bad it's going to get and we marvel at how "they didn't know"

This looks to be a great series. Frankly has they capped it  off with an ending this would be a great film. While I do not watch series TV I am now looking forward to this one.

What great way to end this Years Tribeca.

Before I go and try to type up all the reviews I have in long hand in my notes I want to say a few things.

First I want to thank the festival for letting Unseen Films cover it. Ariela, JB and myself had a great time. I know even those in the Unseen Family who were not reporting for us also had a great time.

As with every year I loved hanging with all of my friends...when our schedules lined up. SO many of them I saw fleetingly so as a result I never go to have lunch or dinner with several people (Chris) the next time we met up. We never did and I'm sorry.

I also made a couple of new friends which is always a delight....

For those wondering when all the dust settles we'll have reported on well over 100 films and events. This doesn't include duplicate reviews,interviews, red carpets, or video Q&As. We basically lived at the festival and never went home (or so it felt).

We have tons more coverage coming, with things appearing until May 4th. The interview with the directors of CARGO is going to post closer to the Netflix premiere largely because there a lot of spoilers in it and I want everyone at least have a chance to see it before spilling the beans.

As I head off I have to say that this is the first fest where I am walking away not wanting to ever see another movie again. I'm ready to see something else. That said this is the first of the nine Tribeca's I've ever attended where I'm walking away feeling that I was done. I was actually done yesterday but went in today because I was so close to the end it would have been sad not to make the whole journey.

And now it's time to go, while the doing is all done, it's time to finish cataloging the memories.
Posted by Steve Kopian at April 29, 2018