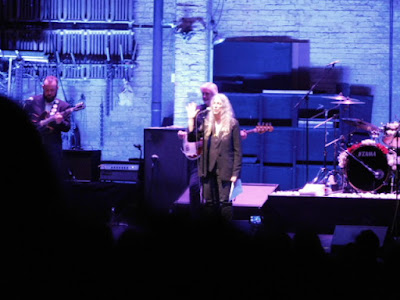 Audio visual record of a rock Goddess at the peak of her powers as she plays one of her classic albums live.

Seen big and loud the film is an overwhelming experience. If you've never seen Smith live this is as close as you can get until you do. The Tribeca screening was followed by a performance by Smith and her band and it topped the film largely because you could feel the live energy bleeding off the stage from Smith.

As anything other than as a concert film the film just sort of is there. There are no real bits beyond the performance not does the film break new ground like STOP MAKING SENSE or the Sigur Ross films INNI or HEIMA. It is simply a record of a moment in time.

While truly great on it's own terms, ultimately going to be something you listen to while doing something else...which ultimately high praise since it will be more than a film but part of your life.
Posted by Steve Kopian at April 30, 2018