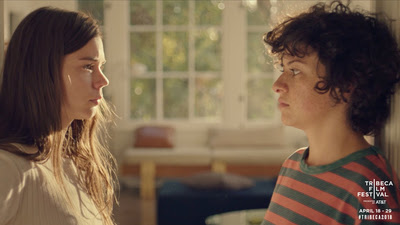 Opening today in NYC and LA after playing at Tribeca DUCK BUTTER is a film that only works in the briefest of moments. Largely it is a messy film that slams into numerous inde cliches to the point you wonder why anyone cares.

Naima is an actress getting her big break on a Duplass Brothers film. She meets a woman named Sergio at a bar and the pair find an instant attraction. When Naima is fired from the film she takes Sergio up on her idea that they should spend 24 hours together making love every hour and being totally truthful. Of course things go sideways.

While the film has several really great and raw moments they are buried in a not very clever film that is much too artificial. The film is set up at the start to mirror a ten year marriage that breaks apart at the outset when one of the woman says we could live a whole marriage in 24 hours and then shows it to us with every cliche about a relationship you can imagine. Everything times out right as the mythical marriage should go so you really aren't surprised with most of the turns- for example I knew they would bring in other people before the failed orgy and I knew it would end badly.

The film is also a kind of failed spiritual quest for Naima as she goes to the great master, Sergio, who doesn't really talk to her but poses great spiritual questions. That's all well and good but it really doesn't give us real characters. We have pawns who are being moved around to prove a point. Who are the woman really? We never really know even after 90 minutes with them. Sadly the most real characters are the older ladies at the bar early on and the two women they call over for the orgy. There is more character and life in their body language than in anything the main characters do.

This is one of the most artificial films I know. Other than the fleeting moments where we get a hint at the real people beneath the bullshit (the scene where they are symbolically telling off their mothers) there is nothing here. While that may have been the point, it makes for a lousy viewing experience since there is no truth on screen.

No I do not recommend the film even when it hits VOD next week.
Posted by Steve Kopian at April 27, 2018

Email ThisBlogThis!Share to TwitterShare to FacebookShare to Pinterest
Labels: drama, not worth the effort, romance, tribeca 2018