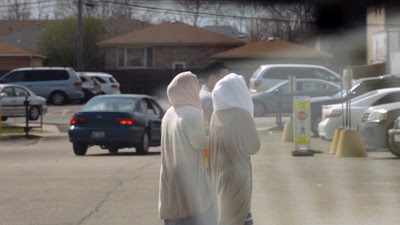 Assia Boundaoui investigates the FBI surveillance of her friends and family going back into the 1990's in and around Bridgeview, Illinois. She tracks the stories from when growing up she saw men doing something on the telephone poles outside her home at 3AM and follows it through the various FBI operations, known and unknown that turned the lives of many people upside down...until they became complacent and let authorities snoop around.

Troubling story of racial profiling and authority gone amok, THE FEELING OF BEING WATCHED is a kind of story of the present day as the police agencies across America watch various groups in order to keep us safe. Never mind that none of the charges ever really stuck and that everyone ended up charged with minor crimes,we are supposed to be safer. Maybe perhaps but millions live in unjustified fear as a result.

What I found interesting is that part of the initial interest in the community came  about because the Israeli government branded one man a terrorist for providing humanitarian aide to Palestinian refugees. The declaration of his being a terrorist carried over to the US and spread outward.

Personally I am not surprised by the tale or the scope of it. The FBI has been up to some questionable things which they haven't been able to hide well. For instance Boundaoui's efforts to get information on an FBI action she knew about because it involved in her family being interviewed by the agency, was at first denied but then resulted in the discovery of tens of thousands of pages of documents.

Its a sad thing to say that I wasn't shocked by anything that I saw in the film.

What shocked me was a discussion that happened during the Tribeca pre-festival screenings where  a critic said that they couldn’t understand why anyone was upset about being recorded since in New York we are constantly under surveillance from cameras that are private or public security services. If they were doing nothing wrong what did it matter?  It wasn’t until it was explained that the cameras were set up as racial profiling, sort of like the New York City disgraced policy of allowing “stop and frisk” which allowed the cops to stop people just because they weren’t white, that they began to understand why the FBI's recording was a bad thing.

This film is real food for thought and as such highly recommended.

For tickets and more information go here
Posted by Steve Kopian at April 24, 2018