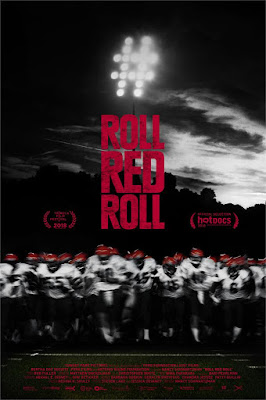 ROLL RED ROLL begins with an audio recording of some teenagers laughing and joking about how one of their number raped a young girl to death (she didn’t die) and saying that it was “the funniest thing ever” and by the time it ends you have gone to the dark side and begin to understand just how fucked up humanity is.

The incident that happened in Steubenville Ohio involved members of the high school football team. The boys were considered gods and allowed to pretty much to do whatever they wanted since they brought so much happiness and pride to the town. However when a girl from across the river went off with some of the team she ended up drinking way too much and was sexually assaulted although she was so drunk she didn’t remember it. When her parents found out they had rape charges filed against two of the boys. The town was shocked (in a Casablanca sort of way) that anything like this could happen- until it came out that pretty much everyone in the high school knew all about it since it was being openly discussed, with pictures, on social media.

If you want to come to hate people then ROLL RED ROLL is for you. Don’t get me wrong it is a truly great film (it is one of the best at Tribeca) but the behavior of the teens and many of the adults make you want to wipe them off the face of the earth. Clearly we are not better than that. The fact that so many people knew what happened and either did nothing or found it hysterical crushes the soul when it comes to future of mankind. I was so pissed off by the time a second earlier incident was revealed involving an even younger girl that I just kind of died inside.

Director Nancy Schwartzman has to be applauded for putting together a film that shows just how rotten many people are. What is shocking is that she doesn’t have to interview anyone to tell the story, all she need do is present the public record. Everyone, including the rapists, put it all out there on social media and Schwartzman simply plays it back to us. Further she presents the police interviews which damns many others whose words of explanation just hangs them out as morally dead.

I have no idea what to say. This is a great film. It is also a really tough film. It’s a film that must be seen. People have to understand that it really can happen anywhere they are. The rot on the human soul that is causing terrible things to happen around the world is in ourselves.

One of the best films at Tribeca.

For tickets and more information go here
Posted by Steve Kopian at April 22, 2018