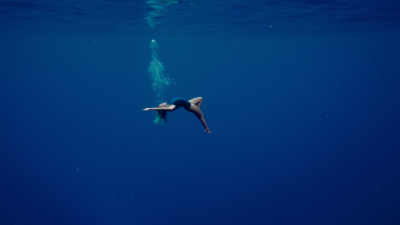 Portrait of surfing champion Bethany Hamilton who lost her left arm to a tiger shark when she was a teenager. The film recounts her life and shows her as she prepares to compete again after giving birth to her son Tobias.

Largely typical surfing biography is lifted up by stunning and visuals and an aggressive audio track. It is the amazing images and overwhelming sound that make this a must see on a big screen with the best sound available. The sound is so impressive that the film was the focus of a Dolby Labs Masterclass in film sound. Trust me you want to see this as big and loud as possible.

Beyond the visceral this is a pretty straight forward of Hamilton who seems to be a sweet girl whose circumstance put her on the radar of most people beyond what a surfer of her caliber normally would be. Its all well and good but she is a sweet girl who has had a charmed existence with the result there isn't much drama. Left on its own the tale of her life doesn't really warrant a 100 minute film.

If you can score one of the Tribeca tickets or if you can see this on a big screen then it is recommended. If not the choice is up to you though I think it will play best for surf film fans.