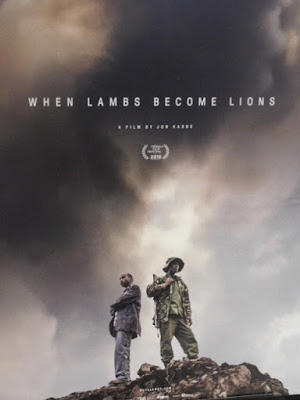 The most heard comment that followed the World Premiere screening of Jon Kasbe's WHEN LAMBS BECOME LIONS was that it wasn't what people expected. It wasn't said in a bad way, only that Kasbe had done one of the things that he is very good at and that is upset people's expectations.

WHEN LAMBS... is the story of the illegal Ivory trade in Kenya. However it is not focused on the killing or just the rangers looking to stop it. The film is a portrait of both the poachers and the rangers as a game of cat and mouse is played between both sides.

Full disclosure-I am unashamedly a huge Jon Kasbe fan. I have loved his work ever since we came into contact four or five years ago regarding one of his films playing at DOC NYC. I have seen a large selection of his work since then and it has surprised and delighted me. His film was at the top of my Tribeca Must See List as a result.

Cut from over 700 hours of film shot over almost four years Kasbe has fashioned a film that doesn't seem like a documentary. Playing more like a narrative he has turned his friendship and access to the forces battling over ivory into something truly special. It is a film full of immediacy and you are there quality. Some how he has managed to put a film together that in sequence after sequence makes you wonder how he got the shot and why the people on screen let him film them.

The answer to that question was revealed in the Q&A following the screening when Kasbe said that he was allowed to film because he had earned the trust of everyone involved. He was with them for more than just the film shoot so they knew he wasn't just going to film and leave. He hung around.  He also added that after a certain point he stopped having what was being said when he filmed translated. By doing that his subjects were less on guard when they spoke. He said that also forced him to shoot more footage since he never knew when he had the right stuff which ended up giving him the best stuff.

What I like about the film, and which I think confuses the hell out of some people, is that Kasbe doesn't take sides. There are no good guys or bad guys. We like everyone because we get to understand them. Actually everyone likes everyone since many rangers were poachers and are still friendly with those in their former lives. Additionally this does not play out as expected simply because there is no artificially created through line. Kasbe simply lets life happen- which results in a whiplash or unexpected ending.

Kasbe is an expert at image creation and editing. No one I have ever seen  has the eye for an image like he does. His images are masterpieces that take your breath away in shot after shot. Time after time I was left to wonder how did he manage to get a shot that perfect. No one could be that lucky or skillful, and yet the entirety of Kasbe's work reveals that yes, he is.

As for editing, the film is astounding.  Watching how sequences play out is an absolute delight as image connects to image telling a greater story. As I was watching the film part of me was pulling some sequences apart as realized that each switch of perspective deepened our understanding what we were seeing.

I am in love with the film, with its craft, with its story and themes.

Half way into it my overriding thought was there is no way I can ever hope to really write about the film until I see it at least one more time.(I will be writing more down the line) However because the film has premiered and because of the need to get word out I've cobbled this piece together.

Do yourself a favor and go see this film. There are only two public screenings left but you must make an effort to go. Not only is this a great film, but is it a beautiful one as well. It is a film of such stunning beauty that when you see the image projected on a big screen you will wonder at how anything could look so lovely.

For tickets to the remaining screenings go here.

Jon Kasbe introduces his film at the World Premiere


Jon Kasbe does a Q&A following the World Premiere