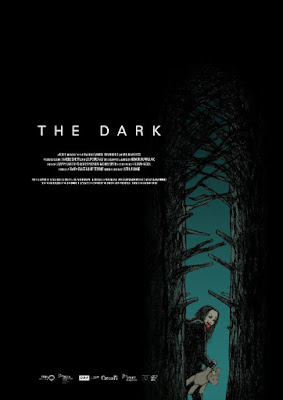 THE DARK will break your heart, but not in a good way. What starts out as grand and glorious homage to the wild and crazy horror films of the 70’s and 80’s where nothing is certain and anything is possible goes sadly off the rails after about 40 minutes as the pacing slows and the seems to become an allegory about surviving sexual abuse.

I’m not going to give you details, but he film has to do with the relationship between the monstrous Mina who lives in the wooded Devil’s Den and the blind Alex who was brought there by a very bad man. As Mina ponders why she doesn’t have the urge to kill Alex the pair begins to bond.

For the first part this is a balls to the wall creepy horror film that mixes horror and humor to stunning effect. We laugh at things that end up catching in our throats. The plotting of the film is such that there is no way to really know where the hell this is going. It is in its way one of the most original horror films in years. We have an undead beast tearing throats and traveling with a young man who has been horribly blinded.

The audience of critics I saw this with was talking back to the screen in fear.

And then things begin to change…

… the internal logic falls away and what was most definitely a kind of supernatural horror film shifts. Alex and Mina begin to bond and the film largely stops being about a manhunt and monsters but about two people who have been horribly sexually abused. Alex begins to connect to Mina and Mina begins to literally become human and alive again, with the visible scars of her “death” slowly disappearing along with her desire to kill and inability to eat people food. The film I revealed to NOT be a horror film but an allegory about recovering from horrific sexual abuse.

While I and the audience members who didn’t walk out on the film had no problem with the film turning into an allegory, the trouble is the switch is so radical it’s as if the filmmakers took two scripts and grafted them together. Plot threads fall away. The internal logic of a supernatural film crashes into the brick wall of reality. Questions don’t appear but explode like rabbits with a suite of copy machines.

To be fair I suspect that the switch is not supposed to be a complete dropping of the horror film- but if you don’t stop thinking of the film as a horror film it becomes unbearably bad. Any plot threads and all internal logic just cease. To think of the last hour as a straight up horror film means you want nothing to work because nothing in the last hour nothing does. It’s such a radical shift that it forces you to rethink what you saw in the first part and it destroys the film completely.

On the other hand if you view the film as purely from the point of view of Mina’s internal dead psyche, that she is not really a monster but a young woman who had been raped and abused by her mother’s lover helping a young man who was kidnapped by a sexual monster who did unspeakable things to him then the film works better. We understand why she connects to Alex. We understand why here physical appearance changes. Of course that still doesn’t explain people referring to her monstrous appearance or some horrific actions- but it makes the film at least tolerable.

Frankly THE DARK disappoints. I think it’s the result of the filmmakers desire to make a serious film about abuse that collided with a need to make a film people would want to see. Somewhere along the way good intentions derailed a good movie. I want to applaud the attempt but despite a good cast and great filmmaking the film never achieves the heights it was reaching for. 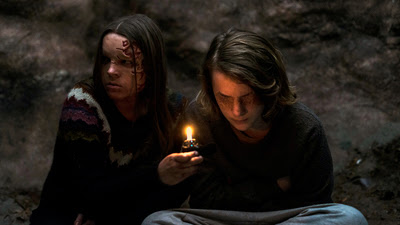