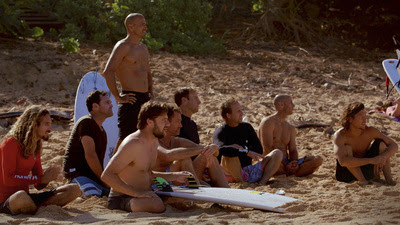 Portrait of the Momentum Generation a group of surfers that included Kelly Slater, Rob Machado, Shane Dorian, Kalani Robb, Taylor Steele, and Pat O’Connell has some great surfing footage but is going to play best for those who know and love the people being profiled.

Beginning with a first fifteen minutes that hammers home every cliche about how a group of guys who had shitty home lives came together to become friends MOMENTUM GENERATION wears out its welcome early by not doing enough to make the story interesting to anyone who doesn't know surfing or the people being profiled already. Who are these people and why do they matter? Its really not clear, even for me who actually knows who everyone is.

Bouncing through time at speed I began to get lost as all the young men blurred together and bits of the story wasn't told. While I could keep the older versions of everyone straight I'm at a loss as to who any of their younger selves were. I'm also not too clear as to what exactly happened when since no effort is made to let us know when anything is happening.

The film also leaves out the families of the grown surfers except for a couple of shots late in the game. Clearly they have kids- but why don't they figure into the tale? Perhaps its for privacy, in which case I understand it, but at the same time this reduces the men to having simply lives in a vacuum which isn't the case.

While I have issues with the film, I was, for the most part entertained by it. The film improves as it goes on, and as I said above it has great surfing in it. Had I been a real surfing fanatic I probably would have loved it, but for now I liked it.
Posted by Steve Kopian at April 27, 2018