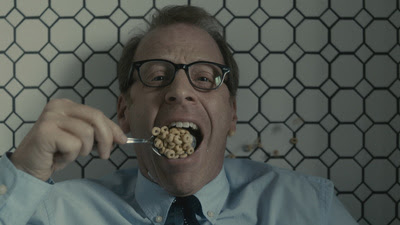 Paul Lieberstein's awkwardly titled film is based on his own experiences suppressing his anger. He had suppressed it for so long it gave him physical symptoms of back pain. He then turned the story into a film that contains some the best moments in any film all year.

Paralegal Fred is not liked in his firm. He is only there because of his dad, a partner in the firm. Struggling to deal with back pain he takes the advice of a client (and soon to be girlfriend) to go see a certain acupuncturist. The treatments help- but they also have a weird side effect in that the needle make music. As Fred navigates a new romance he finds his whole life is going sideways.

If you want off the beaten path this film is it. Sliding all over the place often to stellar effect, SONG OF BACK AND NECK is a must see. Rarely have I ever seen a film that so assuredly and so gloriously went its own way.  To be certain some of the twists and turns will make you groan, but other parts of it will move you to tears.

My favorite parts of the film are the awkward romance between Fred and Regan. It is lovely charming and everything I would want in a relationship. Those sections of the film are some of my most favorite romantic ones in any film ever.

Also high on my list is the music. Every musical moment rocked. Especially magnificent are the pieces involving Fred's back. I can completely understand how people went crazy for it because it is simply that good.

Less thrilling is some of the law firm behavior which really isn't real- but then again this is a fantasy so it doesn't matter. Also the film suffers since all of the parts don't really line up correctly so some of the transition between sections are bumpy.

While very highly recommended because of the parts, I'm still not certain what I think of it as a whole. While I love most of the pieces I'm still working on the big picture. Despite that SONG OF BACK AND NECK is a must see because when it works it sings and even when it doesn't it is a truly one of a kind confection.

For tickets and more information go here.
Posted by Steve Kopian at April 23, 2018