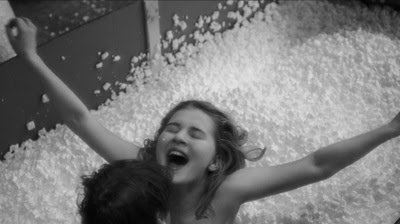 Slut In A Good Way is a Canadian film, filmed in black and white, which tells the story of three teenage girls who are best friends. The girls decide to get a job at a toy store to try to meet some straight boys. I thought this film was fun and cute,and I enjoyed it.

I don't often see modern day movies that are filmed in black and white, and I liked it a lot. I'm curious why the director decided on that. I recommend it. It was a fun and entertaining movie.
Posted by Steve Kopian at April 22, 2018