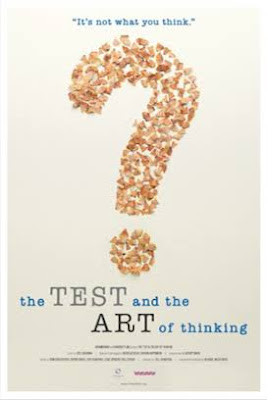 Opening Friday in New York and then around the country as test season approached THE TEST & THE ART OF THINKING is all about the SAT and standardized tests. Plainly laying out the fact that the test don't really test what you know but how you find the patterns in the questions and show the skills the makers have determined are important, the film will make you wonder why we are more and more relying on the test.

While the film is vital and invaluable to anyone taking the tests or who have relatives taking the test, making it a must see (follow this link to determine when its playing near you), it is going to be less vital to anyone else. Personally I have no one taking the test so there was less a sense of urgency. While I enjoyed the film a great deal, it's a film that personally I don't need to see again. On the other hand after seeing it I sent off emails to friends and  with school age kids to make sure they see the film.

For a complete list of theaters showing the film and when go here.
Posted by Steve Kopian at April 24, 2018