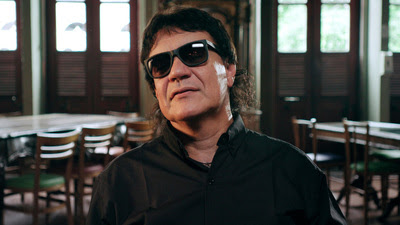 If you asked me what film got some of the biggest laughs of the early part of the Tribeca pre-festival critics screenings I would not have guessed KAISER. While it seems like a joke, and it is a crazy story, I didn't expect it to be laugh out loud funny at times.

This is the story of Carlos "Kaiser" Henrique Raposo, who in the days before the internet managed to talk his way on to numerous professional football (aka soccer) teams in Brazil, despite never actually playing a game...and he did this for 26 years.

There is no way I can explain this simply. Its too crazy a story, and besides the story changes depending upon who is telling it. Basically you are just going to have to go see this film because you aren't going to believe it---probably not even after you see it. I say that because I'm not sure I believe it- yet apparently it's true.

Think of it as a real version of the legendary Sidd Finch April Fool's story that Sports Illustrated ran in 1985.

I laughed my way through the film which absolutely delighted me, even its late in the game revelations.

For more information and tickets to the remaining screenings go here.
Posted by Steve Kopian at April 21, 2018