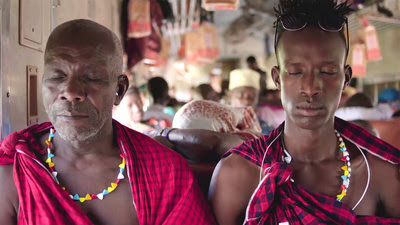 Jeroen van Velzen's train trip across Africa is going to either thrill you or strike you as a variation on a theme (or similar to IN TRANSIT or IRON MINISTRY).

While traveling across country we follow three people:
Isaya wo is accompanied by his grandson on a trip home from the city.
Peter Nyaga who is a preacher who walks up and down through the train praying for the sick and needy.
Rukia a single mother who is traveling from Kenya in the hope of being able to start a new life for her family.

This is a collection of each person's travels cut together to form one journey. It is very much like the above mentioned film but in a different location. Whether you connect to the film will depend upon personal taste, as evidenced by the post screening discussion where the film was heatedly discussed by those in the press corps.

Personally I like the film but I didn't love it. While I understand that we are supposed to only be seeing these people on this one trip, the lives of all three could fill a feature length documentary of their own. There is a lack of real closure was the one sticking point for many at the screening I attended since w board the train while it is in motion and leave before it reaches its destination.

The two threads I would love to see more fully explored is the long discussion about racism and tribal conflict that crosses all through the section of Isaya and his grandson. Being Maasai they are looked down upon and hated by the Swahili tribe members around them. It is an issue that those of us not in Africa really understand or even know about.

The other thread is all of Rukia's life. There is a fighter there and her story of being sold at 14 not knowing anything about life or sex, her time in prison and abandonment by her husband is a one that needs to be told. I wanted to know more.

Over all the film's structure dilutes three great stories.

Worth a look, but it is nothing you need run out to.

For tickets and more information go here.
Posted by Steve Kopian at April 23, 2018