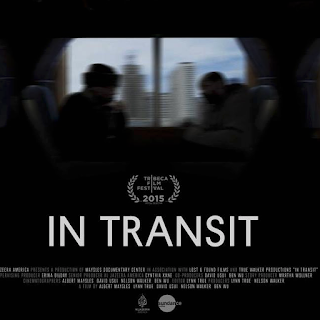 I saw IN TRANSIT when it played Tribeca in 2015. With the film opening in theaters today I'm reposting the review.

IN TRANSIT is one of the final projects worked on by Albert Maysles. Working with several other people they document Amtrak's Empire Builder the busiest long distance run in the US between Seattle and Chicago. The film blends trips in either direction into one long journey.

An American version of IRON MINISTRY which played at The New York Film Festival in 2014 this is little more than an observational look at three days on a train. We see how various people pass the time and interact. In a few cases people, a conductor from the mid-west in particular, are interviewed.

Much like a trip across the country, full of great things to look at and a mixed collection of people.Some people you completely understand why the camera focused on them (the pregnant mother and the shutterbug), Others we are left to wonder where the rest of the conversation is (the two people above) since we seem to have come in the middle of something.

While most definitely worth seeing on a big screen, this is light confection compared to some of Maysles other films.
Posted by Steve Kopian at June 23, 2017