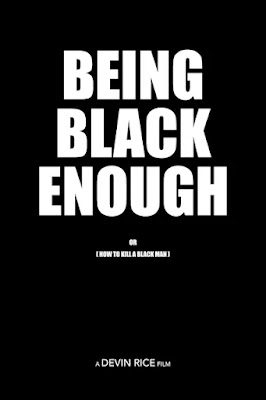 Devin Rice's semi-autobiographical film concerns a black young man who grew up in a predominately white neighborhood. He decides to go and stay with his cousin who lives in the hood and live a gangster lifestyle so he can see what it means to really be black.

Odd mix of essay and drama is a noble effort at looking at race from a decidedly different perspective, tat of someone who is not from the "hood" but isn't fully part of the white neighborhood he calls home.  At a time where most portrayals of what it means to be black in the media are very clear cut it is great that we have a film that isn't. I like that at last someone is starting to have a conversation about the grey areas.

When everything comes together Devin Rice has made a film that is vital and alive. It goes beyond giving us simply answers.

While there is much to love about the film and it's handling of social issues, there are problems. Part of the problem is that the films tone shifts a bit awkwardly at times. Some of the film is set up as if were an essay or something other than a straight drama. Someone speaking the words of WEB Dubois opens the film, We get a number of people stating what Cody, the Devin Rice character, is or isn't. We aren't always sure what we are suppose to feel, with some moments played for laughs and other moments not. While the film is most assuredly heartfelt it's not always clear what exactly it is.

In a weird way I keep thinking that this should have been an excellent theater piece. There is something about it that makes me think that all of the things that don't quite line up as a film would have been spectacular on the stage. At the same time I realize that a good number of scenes could not have been done on the stage.

At no time and in no way should BEING BLACK ENOUGH be considered bad film. Its is far from that. It is a living breathing piece of cinema that ultimately is trying to do way too much. We need more films that do that.  Give Rice a lot of credit for making one hell of a film and for dealing with issues in a unique way, even if it isn't perfect. I have to stand and applaud him for shooting for the stars...

...I also have to say that I'll be really curious what Mr Devin Rice does next because he has made a film of such ingenuity that he has my attention for whatever he follow this up with.

BEING BLACK ENOUGH plays Saturday June 10th at Dances with Films and is very recommend. For tickets and more information go here.
Posted by Steve Kopian at June 08, 2017