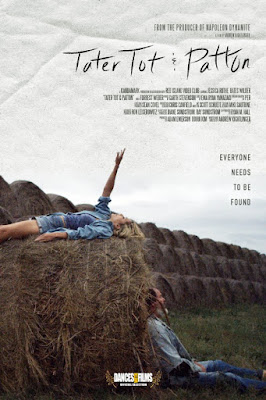 I love it when some one like writer director Andrew Kightlinger takes a situation we know from over use in movies, in this case two wounded people getting together and finding strength, and makes it something truly special.

TATER TOT AND PATTON is the story of  Andie who flees LA and goes to her Uncle Erwin's ranch in South Dakota. They haven't seen each other since before she could walk but they are family and she needs a place to be for a while.  He drinks too much, she is running away and they crash together in ways that only families can. You can kind of figure where it's going so I'm not going to say any more about it other than its wonderful.

What I will say is that Kightlinger has made one hell of a film. From the first frame to the last he has set up the telling of the story in such away that you're pulled in. Yes, we've seen a variation on this before but Kightlinger dresses it up so that we'll listen to it again and accept it as a new story.

I'm not being snide, I'm just saying that I could tell it all to you and you'd dismiss it as something you'v seen- but it isn't, There is a sense of life and weight that lives in the film. While we know the basic frame, we don't know where this will end up. The result is a fine gem of a film that really deserves to be seen.

Also credit Jessica Rothe and Bates Wilder as Andie and Erwin. They give performances for the ages and without them Kightlinger's script and direction would have withered and died. Five minutes into the film you buy them,and hence the film, completely. I'm so sure that they are their characters that I was looking at their IMDB credits and trying to connect the dots and couldn't do it.

Just see this film. Trust me you'll thank me. This is one of the best films at Dances With  Films and a must see

TATER TOT AND PATTON World Premieres on June 9th at Dances With Films. For more information and tickets go here
Posted by Steve Kopian at June 06, 2017