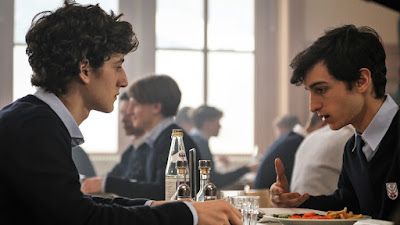 Andrea De Sica's CHILDREN OF THE NIGHT is something that any lover of cinema should see. This imperfect mash up of genres and styles is light years ahead of most films that work  perfectly. Its a stunning first feature from the director and may be the portent of great things to come.

The film concerns Giulio who is shipped off to a remote boarding school where he is bullied and makes the acquaintance of the class free spirit, Edoardo. Forming a bond the pair eventually sneak out at night to a tavern deep in the woods where they run wild.However life isn't as it seems.

A weird coming of age film it mashes in elements of horror,  social commentary, thrillers, fairy tales and five or six other things in it's brief running time. The film's insistence to be it's own thing creates a genuine sense of unease because we can't really be sure where it is going. I've heard the film described a couple different ways but none of them quite get it right. To be certain the school feels like the Overlook Hotel from Kubrick's The Shining  but outside of that you're on your own.

While compelling to watch the film doesn't wholly work. Part of the problem is the film is, sans credits, under 80 minutes and it is trying to do too much. God bless them for trying but this could have been a little longer. Another problem is that while the film feels unique a couple of the turns are a little too well worn, a hazing sequence is nothing new and there are a couple of other which  I can't say lest I ruin things.

All together this was a film that delighted the film lover in me. There is  something so special about a film that tries as hard as this one that actually makes an effort to break with convention and succeeds.

CHILDREN OF THE NIGHT plays June 4 and 7 at Lincoln Center. For more information and tickets go here.
Posted by Steve Kopian at June 01, 2017