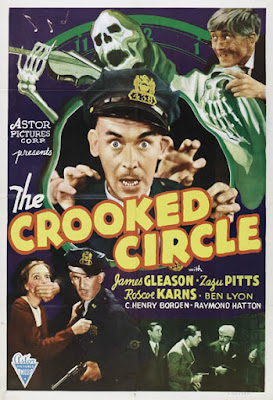 1930's comedy mystery about "The Crooked Circle" a band of hooded crooks who set about plotting the murder of some one who swore to oppose them. Enjoyable but really unremarkable little film, the movie works simply because the cast headed by Zazu Pitts and James Gleason (both of whom would later appear together in a couple of Hildegarde Withers films after Edna Mae Oliver dropped out of that series) and supported by a great cast of actors and actresses you know but may not know the name of (I don't hence the lack naming).

A breezy hour long romp, the movie doesn't make a great deal of sense with mistaken identity, secret passages, ghostly music and people not being who they seem. Its the perfect thing for a dark and stormy night or a late night viewing when one is nostalgic for the late late show.

Currently available from places like Alpha video and other public domain releases I recommend it as one of the reasons to pick up one of the many multi-movie sets such as Night Screams 50 movie set from Mill Creek that are floating around. (I mention that set because I have it and because its collection of mysteries in it quite good with very few clunkers)
Posted by Steve Kopian at June 25, 2017