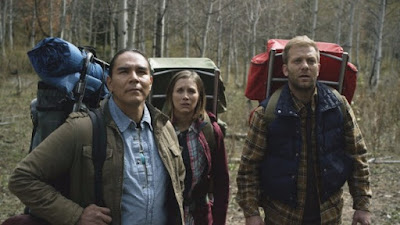 More mystical trip than thriller or horror film LORE is a one of a kind film that isn't what you expect. That maybe a good thing or that maybe a bad thing- depending upon your pint of view.

The plot has the teenage son of a woman going hiking and disappearing. Because the parents are separated and the son is considered troubled the sheriff (eric Roberts in a brief cameo) stops looking past a certain point suggesting he may have just run off. His mother has other ideas since the dreams that she has been having  indicate he may be still alive. Heading on to a mystical mountain with a Native American friend the mother, and her estranged husband begin a search of their own. Things take a turn for the weird when they realize a mystical creature maybe hunting them.

The synopsis has more promise than the actual film which is much more brooding than scary. Stuff happens but its concealed in the darkness or off screen as if the directors were not really interested in the stuff that is going to draw most people to the film.

Instead of action the film is filled with lots of talk and implication of a mystical journey. Indeed the final bit of the film implies something more supernatural than natural with a payoff that doesn't thrill. I was with the film for a while but by the halfway point I was their simply to see how this was going to end and not because I cared about the characters.

Deep and meaningful is fine if you have something to be deep and meaningful about - and LORE despite some excellent filmmaking is wrecked  by not having anything deep to really say.
Posted by Steve Kopian at June 07, 2017