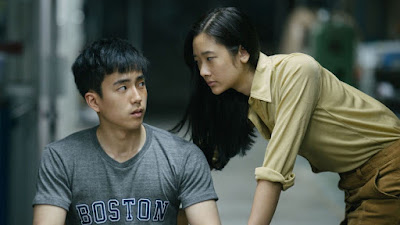 Nattawut Poonpiriya's BAD GENIUS is the opening night film of the New York Asian FIlm Festival and it's not bad.

The plot of the film has girl who is very good at taking tests making a fortune by selling the answers to various tests. When the opportunity arises to make millions by scamming the STIC tests used for international students she jumps at the chance. But the plan, involving taking the test in a time zone ahead of Thailand and sending the answers back is complicated and thing begin to fall apart.

Enjoyable to be sure but for me  the film suffers from being more flash than substance. There lots of showy set pieces which, while stunning, made me admire the technical virtuosity more than they increased my suspense level. For me it was a thriller that held my attention but doesn't thrill, I was too busy watching how the machinery was working.

I have taken a lot of abuse for not loving this to death, several fellow writers have promised not to speak to me as a result. I understand their love of the film, I know why they liked it and why I should,  but it wasn't something I was over the moon about. I know part of my lack of love is that as the opening night film it didn't hit things out of the park or at the very least impressed me that I'm still talking about them- which is something most opening films have done over the past 9 years. For me it's not bad, it's a good thriller, but I kind of hoped for more from the opening night film.