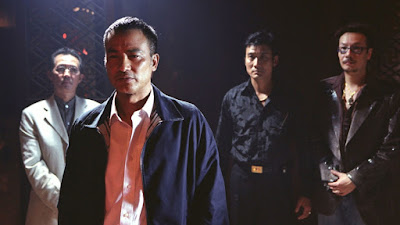 Johnnie To’s Election is, along with its sequel, one the greatest crime stories ever put on film. While the two films can be seen separately, they are increased 10 fold in power when seen together.

The New York Asian Film Festival is only screening the first film and if you’ve never seen it you have to go. While it was to be part of the Tony Leung Kai-Fa tribute and he’s not coming, the film is still screening so there is no reason not to go. The film is an absolute kick in the ass. It’s about the election of the head of a criminal organization and the games played by the men who want power (insert election 2016 joke here).

What follows is my review of the film from the early days of Unseen Films. Because the film and its sequel play as one story, and because that is how I saw it, that is the way the review is written. I have tweaked it slightly but this is pretty much as written.

I should probably say at the start that what is now out on DVD in the US as Triad Election is actually Election2 the sequel to Johnnie To's Election. While you probably can see just the second film I don't recommend it since so much happens in the first film that's only eluded to in the second and the depth of understanding seeing the first film is vast.

Election is the story of the election of a chairman for one of the Hong Kong Triads. Every two years a new leader is elected by the uncles-the elder statesman of the Triad. In the first film the loser doesn't care to hear that he's lost and takes steps to put himself in power, mostly having to do with getting the Dragon Baton which signifies authority. As the leaders discuss and plot, often from in jail, the foot soldiers begin trying to find the Baton and bring it back so the leader can take power. It’s a bloody tale that leaves many dead.

The second film is set two years later. It’s time for a second election and the candidates are lining up. If you thought there was at least some honor among thieves in the first film all notions go out the window as everyone tries to manipulate everyone else. (I want to say more but I don't want to spoil anything).

Time Out NY reviewed the films and compare them favorably to the Godfather. I would say these guys are much more dangerous than the Corleone clan. I think also that they are a meaner bunch of people than even the Sopranos. You don't want to cross these guys because you'll never see it coming, especially when they’ll get you as you’re looking them square in the face.

The first time I saw these films I started them while sitting to do some cleaning and cooking. There was some stuff I could do that didn't require me to move so I sat and put on the first film. I fell into it, and before I realized what was happening I was half way into the film. It was a strange trip as the film shift gears from the election to the finding of the Baton to another unexpected thread. This is a wild ride that keeps you consistently off balance.

As a standalone film this is a good film with a great start. As a tale meant to stand alone it suffers from meandering a bit too much and leaving a few too many threads hanging. Chilling and a deeply visceral punch in the gut the film is not completely satisfying. The film suffers from shifts in perspective and a very large cast of characters...however the story doesn't really end there and it helps knowing that.

The second film picks up two years later as the next election looms. Candidates begin to gather and everyone tries to either become the new chairman or side with the next one. This film has almost no set up it just goes, with a dinner among friends briefly recapping what went before. It’s done in such a way that unless you saw the first film you wouldn't know what was being done.

As a standalone film I'm certain this film will play okay. Indeed the film played the New York Film Festival with nary a word that it was a sequel, so you can see the films apart, but I wouldn't do it, there simply is too you wouldn't know.

This isn't to say that the second film isn't flawed, it does seem to move a bit too fast for the story its telling, and there are a few too many characters to completely follow, but it’s still a really good film. As the first film is improved by the second, this film is improved by seeing the first, its flaws are smoothed out by its brother.

I've been kicked in the chest by these films. The two films together form one of the best gangster sagas put on film.

This is grand human story telling. The layers and the complexity of the tales they tell simply demand repeated viewing. Honestly these are films that get better with a second viewing simply because what happens in each film is deepened by knowing what has gone before and after.

As much as it might be considered sacrilege I'm hoping this gets dubbed into English at some point- simply because there are many people who won't read subtitles and they are missing out on one of the best gangster films of the last few years.
Posted by Steve Kopian at June 26, 2017