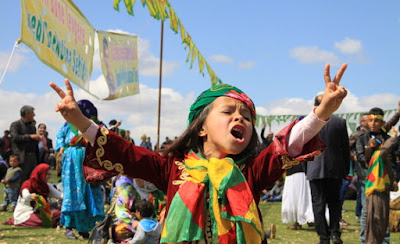 The reason we need this film is it introduces us to 8 year old Evlin. One of the thousands of Kurdish children who was living in the Syrian city of Kobane, she and her family fled into Turkey when ISIS attacked. Living in the camp she has an unbroken spirit that makes you think there is hope for the future of the world.

I was hooked on the film moments into it when into the frame wanders Evlin and she says to director Apo Bazidi, ballsy as all hell "do you want me to talk to you?" He stops filming the people wandering through the camp and focuses on the little girl and the universe changes. Here was a young woman who wants to talk, wants to tell her story, wants to introduce you to everyone she knows and to let us know that she loves her country and wants to go home again. Most of all she says she isn't afraid, She is a fighter like the rest of the people from her city.

Evlin is probably the most hopeful and shining person I've run across in several years. She will put a smile on your face and bring a tear to your eye

While hitting many of the points that you'll have seen in other documentaries RESISTANCE IS LIFE shades them differently. While there is fear of ISIS and for the future, there is hope. There is laughter and smiles. We do not see just dour faces, they are there but they are not the only ones on view. The inclusion of hope and smiles never takes away from the horror or the tragedy but it is a clear indication that life goes on and that change is possible. The fact that the Kurds beat back ISIS and drove them from Kobane is an indication of that.

I really like this film a great deal. I love that when it ends, unlike with most films on Syria and ISIS, I didn't want to crawl into a hole and die. I love that the smile and laughter of one child can make the world okay again. No the world is still a dark place. Yes, there is endless pain and misery, but because  of people like Evlin there is hope for tomorrow

RESISTANCE IS LIFE plays June 8th at Dances With Films. It is one of the most moving films at the festival and an absolute must see