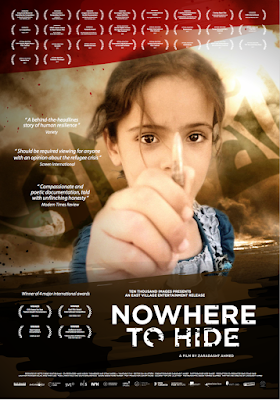 Portrait of Nori Sharif and his family largely shot by Nori himself. Nori is a nurse in Iraq who was happy when the American army left the country and Iraq could be Iraq again but when ISIS comes to his village he is forced to make the decision to stay or flee.

Deeply affecting look at what life is like in war torn Iraq is one of the must sees at this year’s Human Rights Watch Film Festival. Don’t let the seeming similarity to so many other films about the conflicts in the Middle East make you hesitate in seeing this film, this is something magical and special. It is a clear eyed and haunting film about real people trying to survive and make a better life for their children and the terrible things thrown in their path. While the film deals with the cost of war it is also about the human spirit to go on. The final images had me tearing up

This film is most definitely something that I should be writing up more fully and with greater detail but in order to do that I would have to use language that would make this film seem like something it’s not. This is an important story of one man living in extraordinary circumstances and how he fights for the people around him.

You don’t need a lot of words beyond simply ”go see this and be moved”.

NOWHERE TO HIDE plays June 9th and is a must see. For more information and tickets go here.