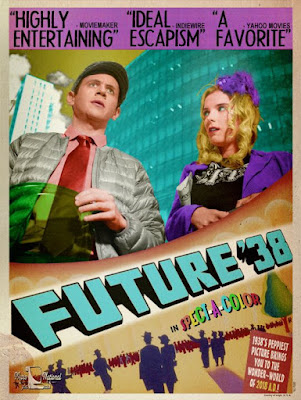 Joe Bendel saw FUTURE '38 at Slamdance back in January. With the film making its NYC premiere at The Art of Brooklyn Film Festival Thursday I'm reposting his review.

There were no flying cars in the future, nor did we enter a Star Trekian age of peace. We should know, we’re living in it, or at least we soon will be. It is an exercise in retro-futurism, imagining the year 2018 as seen from 1938. Our point-of-view comes from Essex, an intrepid time-traveler who hopes to avert the messy world war brewing in Europe. However, the Germans might not be a defanged as everyone assumes during the years Essex skips over in Jamie Greenberg’s Future ‘38, which premiered at the 2017 Slamdance Film Festival in Park City.

Thanks to Essex, there was/will not be a war. Instead, we entered era of Pax Formica, ushered in by a demonstration of our secret weapon. It is/was much like the atom bomb, but it was fueled by Formica instead of plutonium or uranium. The tricky thing is it takes eighty years for the Formica core to build up enough power. The solution is obvious. Stash the super-Formica in a secure vault and send Essex eighty years into the future to retrieve it.

Essex arrives in the lobby of a flop-house run by Banky, a glamorous tough cookie, who finds herself strangely attracted to Essex, in a Tracy-Hepburn kind of way. Although she does not believe his time travel mumbo jumbo, she humors him anyway. Thanks to the ticker-tape version of the internet, they learn the old War Department building has been converted into the new German embassy, so naturally they will crash their reception. However, the Germans have some ideas about rewriting history of their own.

Future ’38 is presented as an ostensibly rediscovered lost film, introduced by Neil deGrasse Tyson. Frankly, its retro-futurism is much more informed by contemporary attitudes than those of the 1930s. However, some of technical mash-ups are amusing (smart phones still placing calls through operators and the like). The look of the picture is also terrific, thanks to the way it so perfectly approximates the look of early Technicolor film stock.

Frankly, the first half of the film feels rather precious and gimmicky, but viewers should stick with it, because Greenberg ties everything together surprisingly cleverly in the third act. It legitimately pays off down the stretch, after the game co-leads win us over. Nick Westrate and Betty Gilpin have a good handle on the dialogue’s necessary rat-a-tat-tat tempo, playing off each other quite nicely. Gilpin is particularly charismatic, channeling her inner Rosalind Russell.

It starts slow, but it steadily builds steam. One might argue it also reminds us of the dangers of complacency when it comes to protecting our freedoms, but that is probably a stretch. It is really just a goofy and ultimately quite sweet film. Without question, it has more heart and substance than Space Station 76 (an obvious comp movie). Recommended for fans of time travel films and Golden Age science fiction, Future ’38 screens Thursday as parrt of this years Art of Brooklyn Film Festival.
Posted by Steve Kopian at June 05, 2017