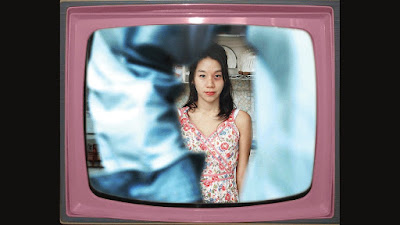 I was not ready for the absolute punch in the face mind warp that is COOKING WITH CONNIE. This 20 minute descent into hell is almost certain to leave you wondering what you just saw and why you are feeling out of sorts.

The basic idea of the film is that Connie is performing on a 1970's cooking show being done in her kitchen. The trouble is that her abusive husband is home and he interrupts the cooking. Where it goes and how it goes will leave you staring at the screen.

Bound to get you spinning from it's first minutes the film is an ever evolving experience that will keep you off balance for it's entire running time. Beginning as a badly done cooking show complete with a sign interpreter in the corner, the film begins to fuck with its audience as we first see a bruised eye suddenly appear on Connie and she shakes it off. She then reacts to his rants off screen and we watch as she disconnects as he staggers in and out of the frame. Director Stavit Allweis then drifts off into experimental territory as Connie begins to behave strangely the change over from conventional to something more visceral is so well done that we can't look away nor disconnect from what is happening. We are invested in Connie and her fate and we too feel the emotional toll as her husband's existence rocks her soul.

About half way into the film I put my head in my hands and just stared at the screen. When it was done I stared into the darkness. The film had knocked me back on my heels and I was trying to regroup.

I know I could easily intellectualize what I saw, pretend to know the deeper meanings of it all, but there is something about COOKING WITH CONNIE that kept me from doing that. For me there was something about the emotions kicked up that were kind of more important than the ideas. I know the feelings were connected to the ideas but by sitting and just feeling after the film for a while, I think I connected to the ideas better. The film became something that worked on the head and the heart with so points Allweis was trying to make hit deeper.

I'm rocked. This is something special

At the same time I know that this film isn't going to work for some people. I suspect that seeing this in a collection of shorts is going to have it play differently then how I saw it, alone and isolated with nothing to get in its way. I  kind of don't envy anyone seeing this in a collection where you can't stop the next film from playing and you can't sit quietly and process what you have just seen.

While I don't know how this is going to play for you, I do recommend it because  I think there is a good chance this is going to be a film which will provoke a reaction and make you more than just a passive observer but one who connects and reacts to it.

The film screens June 3 and 11th. For tickets and more information go here.
Posted by Steve Kopian at June 01, 2017