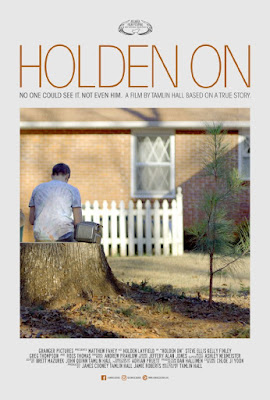 I am not sure how to write up HOLDEN ON. Its not that it’s a bad film, it’s not. Frankly it is one of the best written, best acted, hell, on most levels it’s one of the best films you’ll see all year. The trouble is that by the time we get to the end of the film I’m not sure I’m feeling what they want me to feel.

Based on a true story Holden On is the story of Holden Layfield and his two year battle with mental illness that ends in his suicide. It’s a moving film that shows the pain and suffering that some people face when their brain turns against them. It’s a film that feels real and by the end you feel as though everyone has become your friend.

The trouble is the tone of the film feels a tad preachy. On some level the film comes off as an extended after school special. The film is taking a very strong get help stance. While I appreciate it, the need for the film to make it’s point takes the edge off the drama. I wish the film had just told its story.

Another problem, and one I’m hesitant to mention lest I get brick bats flung at me, is that by having Holden narrate his tale we come to understand his plight much too well. We sympathize with situation and in weird way can see why he chose the route he did. Say what you will director Tamlin Hall and his crew have done too good a job explaining what it’s like to live with mental illness and while we may not agree with the choice we understand how it was arrived at.

Bumps or no HOLDEN ON is great film and is very recommended.
Posted by Steve Kopian at June 08, 2017