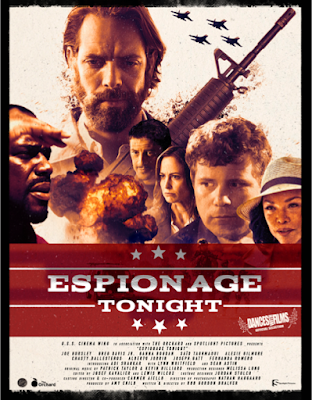 The stated premise of the film is that the US government created a reality TV show about spies in order to give the various agencies transparency. However after the first season the tapes and everyone connected with the show disappeared.  To be honest some of that is right, but on some other level I have no clue as to what is really going on in the film because it wanders all over the place.

This is a technically well done film that tells a fragmented tale of spies and TV. Its a messy tale that has way too many threads. I'm not sure exactly how much of it connects up.  It doesn't help that the nature of the characters is not to be clear, these are spies after all, so they are trying to blur things. The fact the filmmakers are doing the same doesn't make it any easier. 20 minutes in to the film I was kind of hopelessly lost and I staggered my way to the end laughing at some of the jokes, but despising the films otherwise bizarre nature.

What the hell is this film about really? I don't know and I don't think the filmmakers know either. I think they had some good ideas (some sequences are great) but had no way of linking them up other than to make this a found footage project. The result is a mess  that is clever enough that I want to try it again to see if there is something there, but obtuse enough that I never want to waste my time doing so.

The best thing I'll say is it has moments but beyond that god help us.