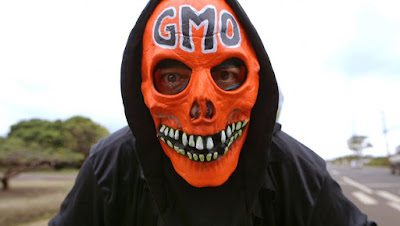 FOOD EVOLUTION in my opinion is a must see documentary. It's very educational and discusses the controversy of GMO food, which is very relevant these days.

GMO=Genetically Modified Organism. They change the DNA. They vaccinate plants through genetic engineering. Change seeds to have enrichment in them. Disease resistant.

Who’s right? I was actually surprised by a lot of the information. There is a consensus among scientists that GMO foods are safe to eat. There's no evidence that GMO foods are bad for us. The film states that scientists have repeatedly tested all GMO foods and there have been no adverse reaction. They also say GMO's have decreased pesticide use.

The people who are anti-gmo say they get their information from social media and that they don’t believe/trust the scientists. They argue against science without any scientific facts.

The film uses farmers, scientists and experts in the field to discuss their point of views. They really discuss both sides so the viewer can come to his or her own conclusion.

The film started in Hawaii which was the first state to ban GMO's. Other cities and countries followed. But we quickly see that maybe GMO’s are not the enemy.

GMO's have saved crops from being wiped out.

An example of this happened in Uganda where there were banana problems- the bananas had wilted. This is a huge world risk as it’s a huge source of nutrition and money. They did a test run of planting a GMO and a non GMO banana plant. The GMO plant grew, the other didn’t. The farmers were so excited. Even the organic farmers wanted in on it.

By the end of the film, several people who were fighting against GMO’s had changed their viewpoint. I wonder what the future will be like.
Posted by Steve Kopian at June 22, 2017