In Brief: Give Me Future (2017) Greenwich International FIlm Festival 2017 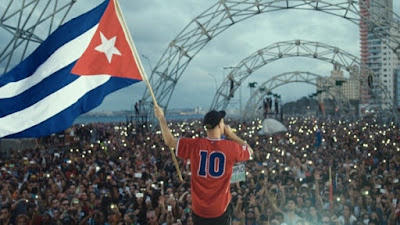 Dual portrait of the band Major Lazer and the youth of Cuba who came to to the March 2016 the band gave after the opening up of relations between the US and Cuba.

Best seen big and loud for the driving music and sense of scale (almost a half a million people showed up to the concert) GIVE ME FUTURE is wonderful portrait of the ability of music to bridge culture. Its from the start everyone in Cuba knows who the the band is despite the American media's portrayal of Cuba as a third world republic stuck in time. I shouldn't have been surprised in today's interconnected world but its still a little surprising to see the crowds singing along and moving in anticipation of the beat changes.

While the film occasionally suffers from trying to follow too many threads, I found that the sheer exuberance of everyone involved from the performers to the fans smoothed over the rough edges.I really like the film a great deal to the point I'm hoping it shows up closer to me so that I can see this on a truly huge screen.

If you like the music this is a must see.

GIVE ME FUTURE plays Friday June 2 and Saturday June 3 at The Greenwich International Film Festival. For more information and tickets go here.
Posted by Steve Kopian at June 01, 2017